Comic Review: The Wicked + The Devine

The Wicked+ The Divine review by Joe David Thompson
The Wicked + The Divine is the new book from Kieron Gillen and Jamie McKelvie, the creative team behind the excellent series Phonogram (you have read Phonogram, right?). 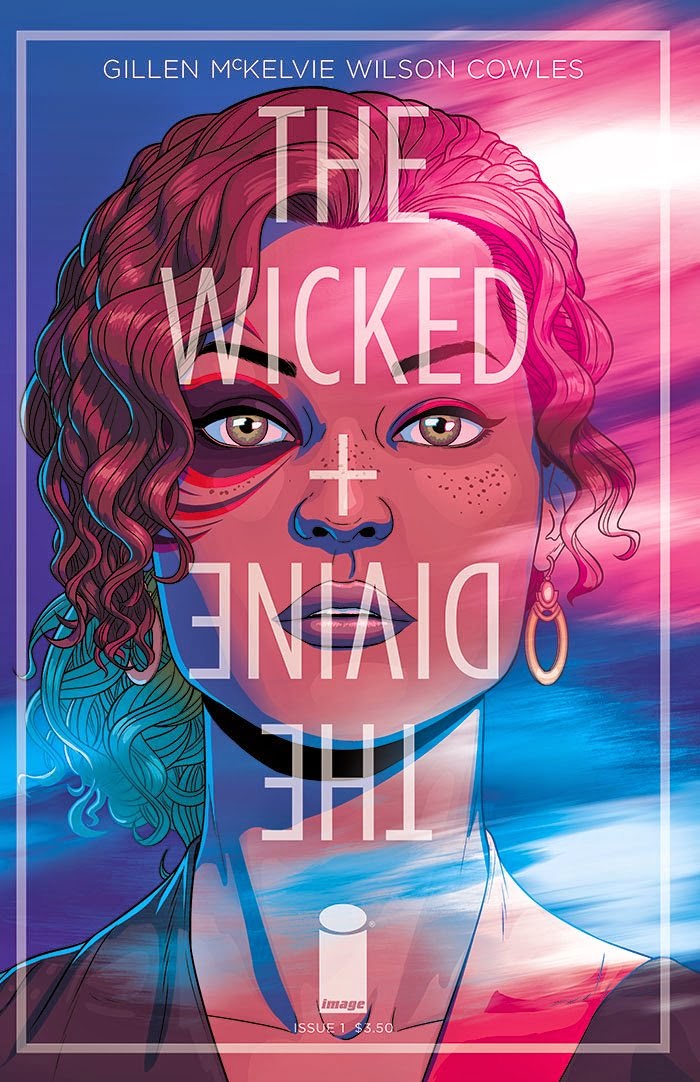 The Wicked + The Divine is built on the intriguing conceit that every 90 years our culture is impacted by the reincarnation of twelve gods into human hosts...with one catch. In two years, they die. To quote the press materials: "Just because you're immortal, doesn't mean you're going to live forever." Their latest recurrence, in 2014, find the gods reborn as pop stars, playing huge concerts and giving interviews in posh hotel suites.


Our point of entry is Laura, a suburban girl from south London on a quest to rebel, if only her parents wouldn't be so supportive. Laura hops a train to a Amaterasu concert, where fans black out from sheer ecstasy at the performance of the Stevie Nicks styled surrogate. Laura suffers the same fate, only to be woken up backstage by Luci, otherwise known as Lucifer (a Beatles fan!) and we're off to the races. Luci whisks Laura to their suite, where Amaterasu is entertaining a very belligerent journalist until things take a dramatic and violent turn.


The book sparkles with Gillen's trademark love of pop music, something that seeps into the pacing and plot. Even the dialogue crackles with the energy of a great single. Gillen is heir to the Joss Whedon throne when it comes to writing witty, human characters. As a first issue, Gillen handles the exposition duties with skill. Necessary information is given through either the images or the same dialogue that introduces us to some of the characters. The world of this story feels rich and I cannot wait to learn more about these other characters, who we don't get to spend too much time with yet, and the various recurrences throughout history. Luci becomes the "star" of this issue, coming off a little like Loki from Gillen & McKelvie's Young Avengers (you are reading Young Avengers, right?). Jaime McKelvie has drawn a simply beautiful book. He delivers uncluttered panels that allow us to focus on the story being told. His attention to detail is stunning, especially when he captures the emotion on these character's faces. The team is rounded out by rich colors from Matthew Wilson and the clean lettering of Clayton Cowles.

The Wicked + The Divine dropped its first issue this week via Image Comics and it comes highly recommended. This will sell out.