Finally, heres the debut of our new columnist, comic and media reviewer, Joe David Thompson. Joe's been doing reviews for other sites like Red Carpet Crash.  I think you guys will enjoy reading his reviews. To send coments and to follow him on Twitter, you can find him on Twitter @jovid52 or email him jovid52@me.com . Enjoy! 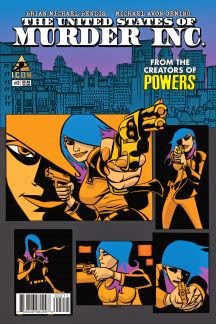 The United States of Murder, Inc. imagines an alternate history of America, where the mafia grew so powerful, it carved out large portions of the eastern coast as its own. Much of the first issue of the series plunges us into this world, as we watch Valentine Gallo, the series lead, as he undergoes the ceremonial rites to become a made man in the mob. When his first assignment quite literally explodes in his face, the family is thrown into crisis mode to discover just what happened. Add to this a bombshell dropped on Valentine by his mother, and the book has its hooks into me.


I'm already a sucker for crime noir and mafia stories, which is something that these two do well. If you're at all familiar with Bendis' writing style, especially if you are a Powers fan, then there's no mistaking his voice here. Moments of heavy drama are interspersed with quick witted humor all through the book. Crime fiction is the genre Bendis cut his teeth upon, and there's no mistaking his confidence here. It should be noted that if cursing is a deal breaker for you, then United States of Murder may not be the comic choice for you. I'm not finding the series as dialogue heavy as some of his other works, and I think the book benefits from this. It definitely clears the pages for Oeming's wonderful noir art, beautifully contrasted with the colors of Taki Soma, also Oeming’s wife .


In this second issue, we watch Valentine as he tries to clear his head, reeling from his mother's confession and Valentine's expected role. I love the questions the book is asking about our identity. Valentine was raised in a mob family, rising through the ranks to a made man. Now that he discovers the lies just beneath the surface, he must ask himself who he is. I have to admit I didn't see his choice coming. Bendis did a fantastic job of diverting our attention to the hunt for the mysterious bombers and the developing relationship between Valentine and the hitwoman, Jagger Rose. I loved the quick sparring between Jagger and Valentine's mother. I certainly hope we get more of that. We also get the beginnings of the back-story of this alternate world, through flashbacks to a famous assassination.


As The United States of Murder, Inc. finds it's legs, it's developing into a book that deserves your attention. You can grab the first two issues now from Marvel’s Icon imprint.
Email ThisBlogThis!Share to TwitterShare to FacebookShare to Pinterest
Newer Post Older Post Home