Crypticon is coming up this weekend. I'm really looking forward to the show. It's definitely one of the funnest cons in the area! I managed to get a Q&A session in with one of the exciting artist/vendors from this years convention. Here's a little Crypticon Seattle preview interview with Toxik Idols creator Len Enders, but first check out this video!
Who are the Toxik Idols? Give a little backstory on the band, if you will.The Toxik Idols are a fictional, illustrated rock band made up of zombies (and one robot), put together by a mad doctor who wants to influence the youth of the world into acts of anarchy and destruction! He kidnaps and kills a random assortment of up and coming musicians and pop stars, then cuts them apart, stitches their parts together and reanimates them, in an attempt to combine their musical abilities and charisma.(As an example- 3 male singers cut up and stitched together to make 1 new reanimated singer) 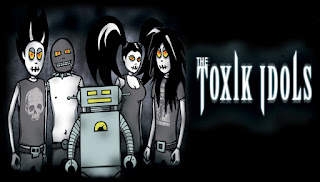 He creates this band then laces their recordings with subliminal messages, which makes kids become obsessed with them and their message of chaos and anarchy. Kids start acting out against all forms of authority, putting into motion his demented plan to sort of F-up society in general. They also have a right-wing religious type group of concerned parents trying to stop them called the “Parents Against Toxik Idols” or P.A.T.I.

Oh yeah, and I should probably mention that in this story I use the term zombie very loosely. The Toxik Idols are a little closer to Frankenstein type monsters, stitched together and brought back to life. But they’re smart and devious, not stumbling around, dragging their feet with slobber hanging from their mouths. They do eat human flesh to survive though, like traditional zombies.

What inspired or influenced the idea for the Toxik Idols? I’m kind of obsessed with the way extreme conservative types have, historically, blamed rock music for the ill behavior of the youth, especially in hard rock in the 70’s, 80’s and 90’s. Specifically groups like Kiss, Motley Crue, and Marilyn Manson respectively, at their most popular points. It’s crazy to me that as recently as the mid 90’s, religious groups were freaking out thinking that Marilyn Manson was “of the Devil”, protesting shows and what not. Or that in the 70’s and 80’s people were seriously concerned about backward and subliminal messages in records coming through the speakers and influencing kids to commit crimes, worship the devil, etc. I love it!I started watching all of these really great old videos on YouTube about it. T.V. news investigative reports about subliminal messages in records, or bands literally being sued because some kid in Middle America committed a crime and said the lyrics made him do it.

So the idea struck me- what if the religious freaks were right and no one believed them? What if a band really was using some kind of weird technology to get kids to do evil things while making them rich? What if that rocker dude in the scary zombie looking get-up really was a zombie, so to speak, and we all thought it was just an act?

It was this idea, coupled with my other obsession- pop music and the making of pop stars, by producer type dudes or via “American Idol” type shows- that came together for the Toxik Idols story idea.

Every aspect of the group to this point, has been exclusively created by you, from the music right down to the artwork, correct?
Yeah. I illustrate the band, scan, color and do all the layout and graphic design stuff. I also write, perform and record all the tunes. I actually recorded all of the music old school style, without the aid of a computer, which was total HELL! No samples, no cut and paste, no drum programming, no punch-in recording. If I messed up, rewind and start all over again from the beginning. I’ll never do that again….

Initially you wanted to remain anonymous as the creator of the T.I.'s. I've known you personally for a while and seen some of your other art work and love it, so don't understand why you'd have wanted to remain unknown. What changed your mind about keeping your anonymity?
I was really inspired by street and graffiti artists, dudes like Banksy, to name a really popular one, whose identities are kept secret. I remember when the internet was still a little new (to me at least), and I kept seeing those Obey Giant stickers and posters all over the place in the city and I wanted to know who was behind it so badly! Then, when I discovered who it was, I was kinda bummed. The mystery was fun.So I thought it would be fun to do the same kind of thing. This “mystery” band puts out music and artwork but no one knows who it is, rumors start spreading and so on.

Well, once I started actually putting everything together, trying to come up with ways to simultaneously put my work out there and still remain forever anonymous quickly became a major pain in the ass. Plus, I was always planning on having booths at Comicon type conventions and I started to see that things could become pretty weird if I’m straight up lying to people’s faces about who created it all. Besides, people go to those conventions to meet the artists, get stuff signed and chat it up, and I wouldn’t be able to do any of that.It was a fun idea, but the potential for awkwardness at conventions was just too high.

What direction do you hope to take the Toxik Idols in? What kind of plans do you have for their future? Videos? New Album? Concert experience?
I’m currently illustrating a webcomic series which will tell the band’s back story. It will start out with a fan who, after being witness to a very unsettling event, discovers the secret behind the band. I’ll make real-world Toxik Idols merchandise that is featured in the series. So far I have cds, a couple different t-shirts, stickers and posters. I wanted to have merchandise done before I started the series so that right from the beginning you could buy the cd or t-shirt that is featured in the story. Kinda “cart before the horse”, I know, but whatever.

In the near future I’m planning on doing a 7 inch vinyl record with an 8 page coloring book. That’s pretty much ready to go. I’d love to do animated music videos, but I don’t know how to do animation at this point. Learning animation is on my to-do list.

Instead of recording a whole “album” worth of songs, I’m going to start posting singles and then compile the best ones into a collectible release later. Maybe a cool book or something.In the more distant future, my pipe dream would be to see a Toxik Idols Pixar-style semi scary movie! Ultimately though, I want them to do holographic live performances. Kinda like the holographic Tupac at Choachella a while back. Holographic, digital pop stars are a huge deal in Japan (like Miku Hatsune), but have yet to really hit the U.S. I think that would be the coolest!

Crypticon is going to be the Toxik Idols first convention and public experience! What are your goals for the weekend?
What are you hoping to get out of the weekend for the band and yourself?Really just start getting the name out into the world. Seriously doubt I’ll sell much stuff since no one will know who I am or what this project is. It’ll be much easier after the webcomic is going for a while, but for now it’ll just be about spreading the word and having some nerdy fun.

Do you see the convention scene as a great venue for marketing the Toxik Idols? Definitely. I always thought it would be the perfect venue for this type of thing. Especially since this isn’t a “live band” type project. I think it will be to my benefit that I have a music element to my stuff too, while most artists at conventions are just pushing books and print type stuff for the most part.

Does Len have any other projects on the horizon that we should watch out for? Care to share a little of your own musical and artistic background with us?
This is pretty much the only thing on my plate at this time and it’s so much work that I doubt I’ll be doing anything else for quite a while. I’m pretty focused on it. My background musically- I’ve played in a couple bands, helped record some friends music projects, kinda did a weird solo recording project once. Some DJing from time to time. As for art, I’ve always been drawing, making flyers for bands and performers. Stuff like that. I worked in print and graphic design shops for a bunch of years, just soaking up as much info as I could about design and printing.Is there anything else you would like to mention to fans and potential fans?
haha… definitely don’t have any fans yet so I can’t say much to them! But to everyone else- if you’re into any level or genre of comic book nerdiness, zombies, monsters, anime, rock music, horror flicks…. The Toxik Idols might be right up your alley so check them out. And if you’re attending Crypticon Seattle drop by and say hey!


I'm really looking forward to watching Len's project grow! Be sure to stop by the Toxik Idols booth #106 at Crypticon next weekend in Seattle and say hi. Grab some merch or a CD. And if that wasnt enough of a reason to check them out, I will be helping Len out at his booth!
Email ThisBlogThis!Share to TwitterShare to FacebookShare to Pinterest
Newer Post Older Post Home