Hey friends! Whats new? Figured I'd check in since I knew you were itchin' to hear about how the Comic Book Swap Meet went last week..

First of all, let me explain what were doing with our "Swap Meet". I live in a small, out the of way town. There aren't any comic shops, but there are a lot of people into comics, gaming, and nerdy type stuff.
Luckily we have a couple small locally owned toy and game shops like Whistle Stop Toys, who carry Magic the Gathering cards and supplies and also host sanctioned tournaments, and Completely Puzzled who carry a great selection of table top games and supplies (Both of those shops were very helpful in promoting the Swap Meet). Unfortunately like I mentioned, no comics, which i think is weird. I figured such and artsy community would support the art of comic books and creating comic books.

Anyways, my friend Beau and I decided, lets bring the comic lover out of the woodwork. Lets host a swap meet where comic collectors can bring books to trade, sell, and buy from each other. This would even be a great social event where the like minded can get together and possibly make a new friend or two. Hopefully we could open up old collectors eyes to comics, or maybe inspire a new generation of collectors. We mostly wanted to just have fun, while gauging the community's interest with hopes of putting on bigger events in the future.

Well, we promoted the hell out of it around town and on social media sites, and were pleasantly surprised. We ended up having the room packed all day with collectors, vendors, indy publishers and more. Vendors like Cosmic Comics from Port Angeles, WA... Whistle Stop Toys from here in Port Townsend, WA...Comic publishers Your Mom Comics out of Sequim, WA (who will be at Emerald City Comicon this year. Very excited for my friends from Your Mom)...Neoglyphic Media out of Bellingham, WA..and creator Donna Barr from Clallam Bay, WA

We even invited a special guest, in comic writer and film critic Robert Horton. Robert Horton is a co writer on Moonstone's acclaimed series Rotten, and he is also the author of Rotten spinoff "Lost Diary of John J. Flynn, U.S. Agent". He brought along copies of the book to sign as well as do his talk on the history Sci-Fi and Alien invasion films and their effect on pop culture and events over time. Though we had some technical difficulties, it was a really fun panel with lots of history and great clips of old films. Mr. Horton knows his shit.

It was a fantastic day, and we hope to make these event more regular, and bigger, with the eventual result in making a small con here in our area. If anyone has any suggestions, fundraising ideas, experience with cons, or want to get involved with what were building, contact me! Im starting to recruit a small comittee as we speak.

For now, look at some pictures...unfortunately they're not very good pictures. Someone bring a real camera next time!!! 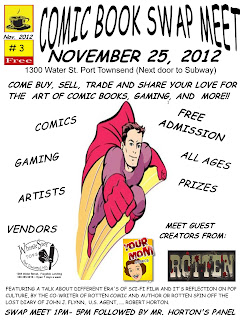