Dig in to Cool Projects #21, and consider checking out and supporting these works.

First of all, if youve been on social media AT ALL, youve probably come across DC Comic's ad campaign for Lauren Myracle's YA graphic novel, Under The Moon: A Catwoman Tale. They pulled out all the stops even as far as to produce trailers for the comic.

I figured with as much effort as DC put in, and having been written by a bestselling author, why not check out the preview pages at
https://www.dccomics.com/graphic-novels/under-the-moon-a-catwoman-tale

I can honestly say, this teaser sets the table for a really good book about a young reclusive Salina Kyle and her background like coming from a broken home, relationship with Bruce Wayne and her own family. While making attempts to allow herself to connect with the world,  something tragic happens, only to send her spiraling back into a dark hole.

I can dig where its going and am highly considering grabbing a copy of Under The Moon: A Catwoman Tale. I think Lauren Myracle and DC might have nailed it with this one. Track it down.

I also came across another great looking board game Kickstarter campaign, which I liked for the nostalgic factor.. Space Invaders the Board Game, from 612 Entertainment is coming soon. Based on one of the early arcade classics, Space Invaders, this card and board combination game wont require you to spend all thoae hard earned quarters, while still allowing you to kick alien , and your oponent's butt.

The developer has already reached their funding goal, but this one seems worth checking out, especially for a game lover like myself. Here's the link to the Space Invaders campaign: www.kickstarter.com/projects/533894064/space-invaders-the-board-game

Im especially excited about this last one because its one of the most polished indie comics I've read, its full of gore and humor, and they're going to be represented at the Comic Book Swap Meet, which we will discuss in another article. 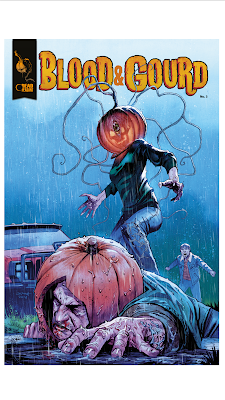 I'm talking about issue 3 of Blood and Gourd. Blood and Gourd is Jenz Lund's series about killer mutant pumpkins attacking humans. Is it nature fighting back, or just supernatural beings possessing the gourds?

It has a really B-horror movie feel to it, and if you're into really cheesy and gory horror stories told through amazing artwork and writing, then you'll love this series.  Do yourself a favor and get ahold of the Blood and Gourd comics. You wont be let down. You might be grossed out, but in a good way. You can score digital and hard copies of the first two issues, and Blood and Gourd. #3 at webleedhalloween.com 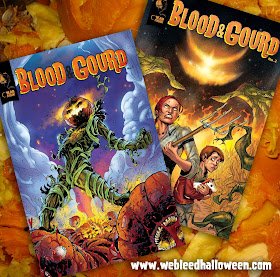 As mentioned, the Blood and Gourd team will be represented at the Comic Book Swap Meet. The Comic Book Swap Meet is a "mini comic con" produced by thestevestrout.com on the Olympic Peninsula in western Washington State. Keep up on info on that event at Facebook.com/ComicBookSwapMeetf, and if your in the Pacific Northwest, please try to join us!